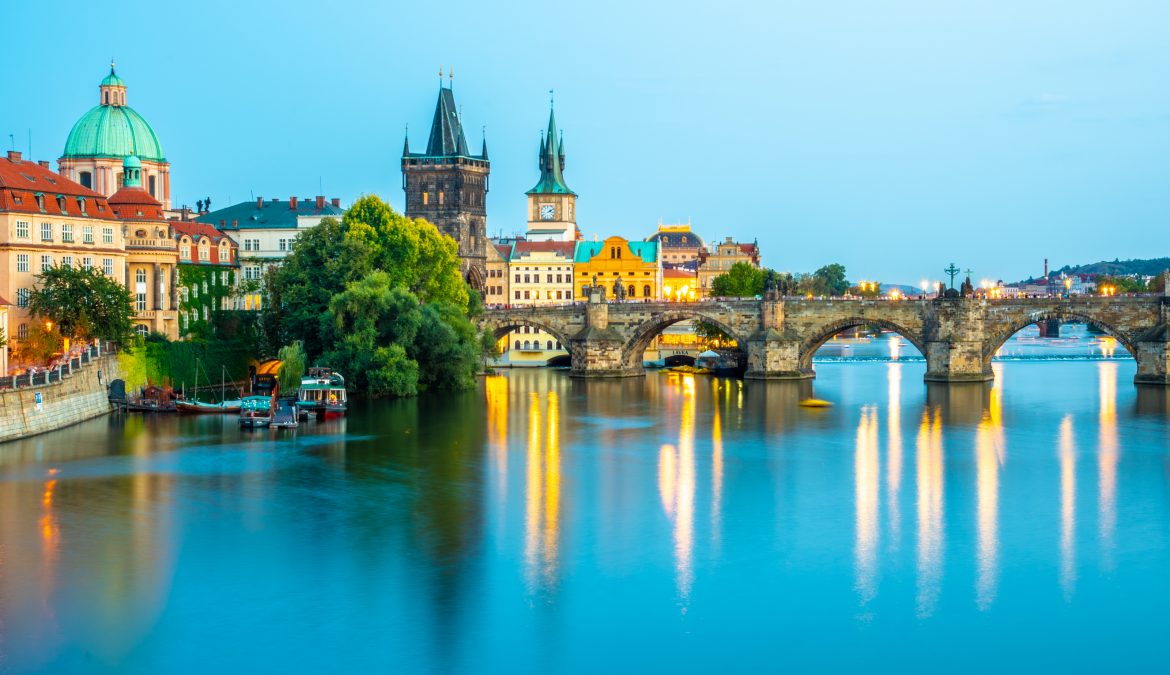 Rain, shine, sleet or snow? Find out about what to expect from the weather in Prague, the best time to visit the Czech capital and what to wear in this sometimes icy city.

The ice and snow in the Czech capital peaks during January and this is by far the coldest time of the year, so pack warm boots and a cosy coat as temperatures range from -2.4°C to 2.6°C. Brr.

While there may be a slight thaw at this time of year, and temperatures increase, it is still very cold and snowy at -1.8°C to 4.4°C. On the streets, people are wrapped up against the chill in jackets and colorful scarves.

It’s still cold during March but spring has started to show a warmer mood with thawing ice and sunny, clear skies. The low temperatures run from 1.5°C to 9.1°C during the day but nights are still below freezing.

Warmer weather creates a more pleasant mood in the city and while still cold, spring is on its way. Low temperatures are around 5.1°C to 15.1°C during April. People venture out more but there is still snow on the ground.

May – a little bit merry

The city comes alive in late May as the weather becomes pleasantly warm and locals venture out into the parks to walk, rollerblade, go cycling or enjoy summer cinema or beer gardens. There are only about 10 days of rain during May. Temperatures range from 9.7°C to a warmer 20.3°C at this time of year.

June is warm but drizzly in the capital city. Most days are sunny and temperatures in the city rise from 12.7°C to 22.8°C. However, around 71.1mm of rain falls during June, so definitely pack an umbrella.

July – fun in the sun

People are out on the streets in full force, sampling foods from street vendors, enjoying a pint at the beer gardens, letting children play in the parks and walking barefoot. The rain lets up for a while during July and August so this is many people’s favourite time of the year and there is almost a celebratory mood in the city.

July is warm with less rain than June which makes it one of the most popular months for holidays in the city. Low temperatures from 14.5°C, with highs of 25.3°C are usual. Excursions to museums, monuments and art galleries or trips to Stromovka and Letna Park or the Havlíčkovy gardens, or Kampa or Detsky island are embraced for a sense of the outdoors.

August in Prague is warm and dry. It’s a pleasure to watch the late sunsets in the city and the weather is very warm in the early evening. Temperatures range between 14.2°C and 25.1°C and the nights are cool – definitely an excellent time to play in the city.

September – something chilly in the air

As autumn touches the city, temperatures range from 10.5°C to 19.9°C during the daytime, with lows of 11°C at sunset. It’s best to dress in layers at this time of year as the cold evening air gets chilly.

Temperatures decrease sharply as the colder months set in, ranging from 6.4°C to 14.2°C. It still rains during October but it’s much drier than during the summer months. The mood in Prague changes, as days grow shorter and more time is spent indoors at restaurants or pubs.

The autumn months draw to a close – heralding the colder temperatures that pave the way for ice and snow. Temperatures range from 2.1°C to highs of just 7.2°C, so people begin to spend most of their time indoors.

One of the coldest months of the year, at a mere 3.4°C average maximum temperature, December is a month for time spent with family and friends in preparation for the festive season. Despite the plummeting temperatures, the wintry snowscape is still one of the prettiest times of the year to visit.

We use cookies on our website to give you the most relevant experience by remembering your preferences and repeat visits. By clicking “Accept”, you consent to the use of ALL the cookies. However you may visit Cookie Settings to provide a controlled consent.
Cookie settingsACCEPT
Manage consent

This website uses cookies to improve your experience while you navigate through the website. Out of these cookies, the cookies that are categorized as necessary are stored on your browser as they are essential for the working of basic functionalities of the website. We also use third-party cookies that help us analyze and understand how you use this website. These cookies will be stored in your browser only with your consent. You also have the option to opt-out of these cookies. But opting out of some of these cookies may have an effect on your browsing experience.
Necessary Always Enabled
Necessary cookies are absolutely essential for the website to function properly. These cookies ensure basic functionalities and security features of the website, anonymously.
Functional
Functional cookies help to perform certain functionalities like sharing the content of the website on social media platforms, collect feedbacks, and other third-party features.
Performance
Performance cookies are used to understand and analyze the key performance indexes of the website which helps in delivering a better user experience for the visitors.
Analytics
Analytical cookies are used to understand how visitors interact with the website. These cookies help provide information on metrics the number of visitors, bounce rate, traffic source, etc.
Advertisement
Advertisement cookies are used to provide visitors with relevant ads and marketing campaigns. These cookies track visitors across websites and collect information to provide customized ads.
Save & Accept
Powered by